Disable power ON when plugin it in and instead use the power button?

No setting yet to disable the auto-on when plugged in. Hopefully its coming though. Best to keep it on a strip or outlet with a switch or unplug it when not in use. No one wants to arrive home from a trip after a power outage and find out their QC has been on for three weeks. Also, probably not very good for the QC if your power tends to stutter on and off when there is an outage, as ours does. I have to believe they will offer a global option for this behavior at some point unless it is baked in.

I notice also that there is a green light inside the QC chassis that stays on all the time when it is plugged in but shut down. I suppose it could be an LED for the Wi-Fi adaptor, although maybe it just indicates current is present.

Fingers crossed that they can get it done and it’s not baked in.
This one really bothers me tbh.
I don’t see the point in auto powering when you have a power button and also you made a few good points there of why to get it fixed or add an a global option.
Fingers crossed

That happened to me. Power went out, and the next morning i notice my QC is on. Not a huge deal as it was noticed (<8hrs) but I always unplug now. Lol

This is a really good idea. I keep a cover on my QC when I’m not using it, so if it accidentally turned on it’d slowly cook itself for hours. I’d better start unplugging it.

I imagine a setting would have to be at the BIOS level, so I wonder if this is even a possibility.

This is a really good idea. I keep a cover on my QC when I’m not using it, so if it accidentally turned on it’d slowly cook itself for hours. I’d better start unplugging it.

I imagine a setting would have to be at the BIOS level, so I wonder if this is even a possibility.

I was wondering the same. Appears like the “soft” electronic ‘On’ switch on the QC might require power to operate. If that is the case, I am hoping that the switching capability can operate with minimal circuitry required, without necessitating bringing up most of, or the entire, operating system. Along those lines, if Neural can give us an option to disable auto-on, what systems/components on the device, if any, would have to stay powered up when the QC is plugged in. It would not be a good solution, for example, for the entire system to be up, but with a blank screen.

Hope they work it out, otherwise it seems a mechanical switch might have been a better way to go.

You can get an inexpensive single switch like the one in the link below so I doubt they will be developing anything for that purpose. You can even get more compact inline switches with barrel connectors. Included a link for that as well below (IMPORTANT - CAUTION: The links for the barrel connector switches are ONLY AN EXAMPLE. You would have to make SURE you got one with the correct polarity[although most are just a passthrough] and barrel size!!! ). Also, the switch should have at least a 3amp spec, although apparently the QC rarely to never draws that much power.

Additionally, and I am sure this has probably been answered here already, without confirmation from Neural that just switching off the QC is ok, I would continue to use the QC’s switch to shutdown before doing a hard power off with a switch. Does anyone here know what Neural advises regarding unplugging or switching the QC off without shutting it down first?

Naff isn’t it.
Whoever designed this “feature” clearly didn’t use multi-fx pedals professionally…

Btw, just for the record, the switch on the QC is a true piece of design elegance. I truly admire it from an aesthetic perspective. If they can improve on the current instant auto-on state of affairs in a manner that doesn’t just leave the QC “half on”, they will have a big win.

Does anyone here know what Neural advises regarding unplugging or switching the QC off without shutting it down first?

I believe we’re OK there; from the user manual:

“To turn Quad Cortex off, press the capacitive power button and select SHUT DOWN. You can also remove the power cable from the back of Quad Cortex.”

I’m not sure I can bring myself to do it, though!

I believe we’re OK there; from the user manual:

“To turn Quad Cortex off, press the capacitive power button and select SHUT DOWN. You can also remove the power cable from the back of Quad Cortex.”

I’m not sure I can bring myself to do it, though!

LOL, know exactly what you mean. Great find though! When all else fails, RTFM. So, even if we have auto-on for the duration, a simple and inexpensive switch can mitigate the issue. If, you can only get yourself to use it.

For the cautious or perhaps those with an expired warranty, the extra step of shutting down first remains an option, but that switch will make sure your QC doesn’t zombie out after a power outage. Helpful at a show too if you want to plug in without instantly going live.

While I appreciate the shutdown feature, I find that if I don’t shut my speakers down first it creates really horrible noise into the speakers when powered down until I remove the power cable.

Unless that is fixed, unplugging seems to be something you should always do anyway.

Yeah, I have the same issue with the speaker noise.

Yep, everyone have the ‘speaker bang noise on Power Off’ … this is really unfortunate, we must turn off the monitors before powering off the QC …

I really don’t get it… The ‘Power Off’ process should gracefully save the current volume, turn the volume to 0 before shutting down , and restore the previous volume on the next boot … Maybe there’s something wrong on the hardware side that disallow this ?

+1 for adding it to the feature request

For those of you in the UK, I bought this one in amazon: 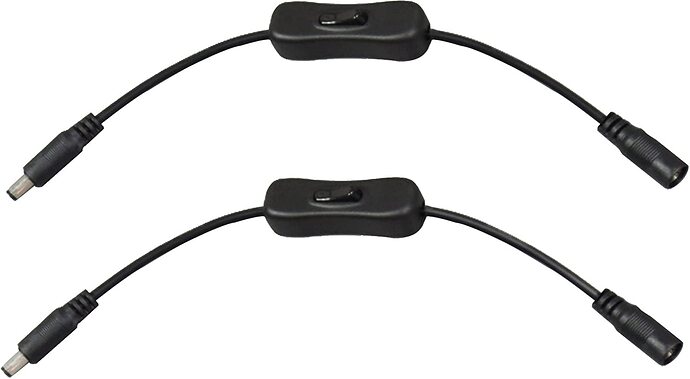 And it works great!

And for those in the US, I have this one and it also works well. Rated for 5 amps and a wide voltage range. I tested it with a multimeter to ensure the polarity was correct (it was). The barrel connectors are passthrough. 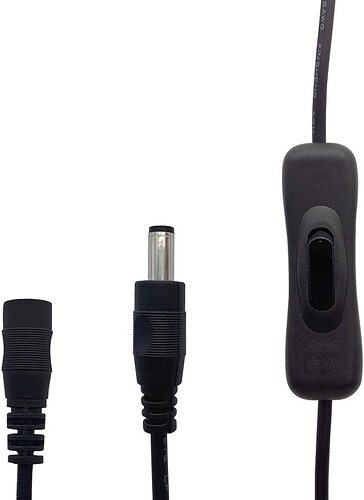