What kind of pedalboard are you guys using?

and I think I can only put one image per post - here’s a photo of the power supply and the back of the board. It’s a bit messy, but I’ve just run out of zip tracks 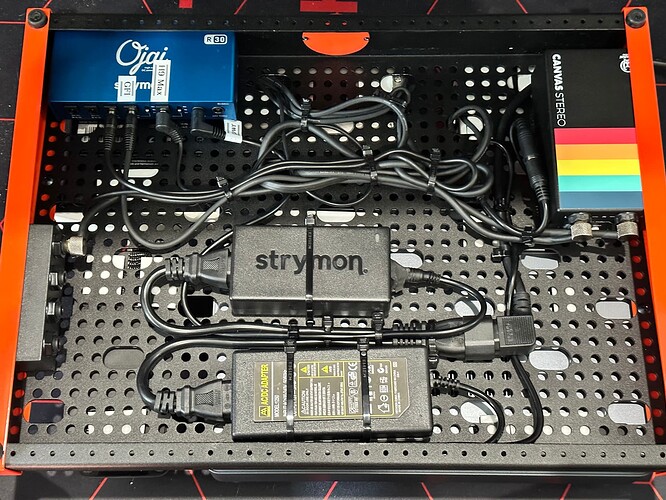 Any one planning on ordering a Crux to alleviate the spaces on their DC7? I pinged my Sweetwater rep and he said they’re only $70 which I think is a steal for the problem it solves.

I can’t find the chronograph …

Hi, do you mean this one? Unfortunately it is discontinued. Sometimes you can find it at reverb oder ebay. But to be honest, it is not so well build. It looses a lot of time and oftern forgets the 24 h mode. 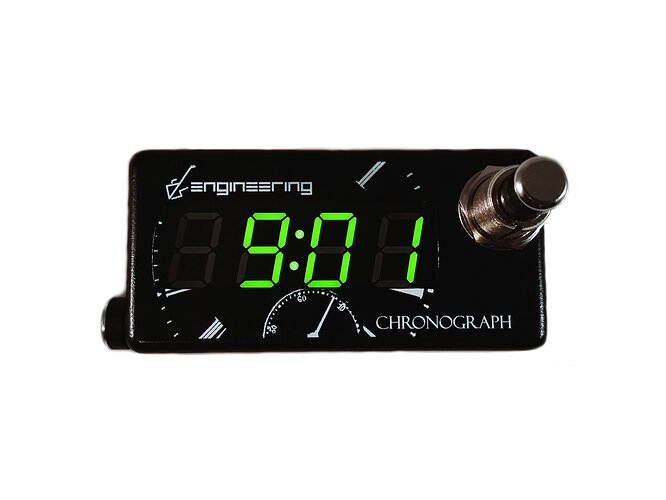 DISCONTINUED - The current version of the Chronograph is discontinued. A new version is in development. Thanks for your patience as we seek to deliver a new and improved product. Time can be a powerful ally or your worst enemy. The Chronograph... 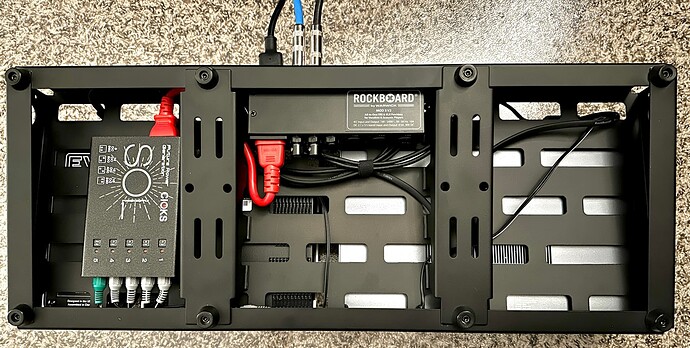 Oh man. Looks awesome. My H90 is on order. How does it sound with the QC?

I love this small footprint! 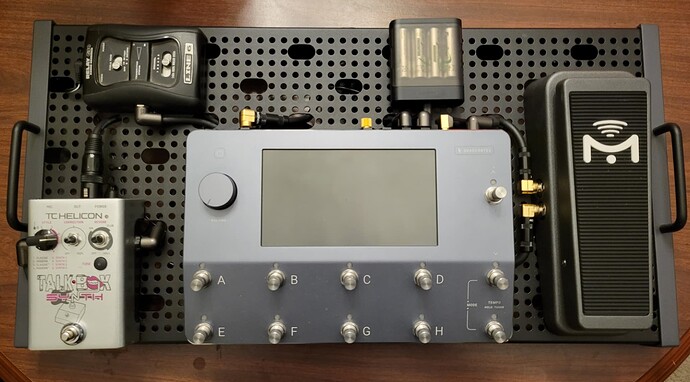 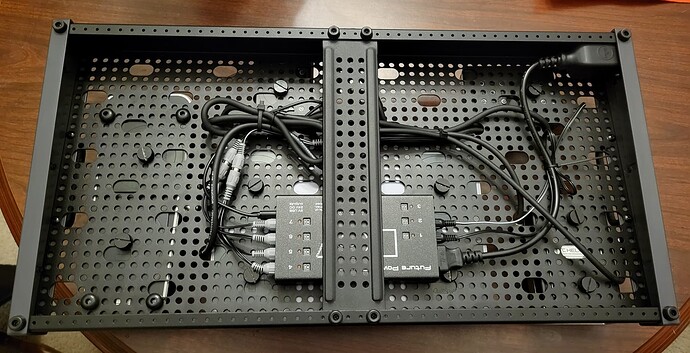 The H90 sounds so, so good. I love it. I put it in split mode so each of the two effects channels are separate from each other, and connected each of them to one of the loops on the QC. That way I can use either (or both) in any order in my scenes. The only issue I have is the QC not being able to send tempo out via midi to the H90.

That’s awesome. The routing possibilities are crazy. Do you think there is a way to use it like you are but then on certain QC presets use it in stereo without having to change the patch cables?

I don’t think so, because you’d have to switch the H90 to the other mode and then it uses in/out 3 and 4 for one stereo loop, instead of 1 and 3 for 2 mono loops.

Before getting my Quad Cortex I used a Vertex Effects tiered board. It’s super well made and the ability of having a riser is great because it takes up less space but you can have more pedals on it. The one pictured is the 1st version. Their new version has magnets that secure the top rather than screws. 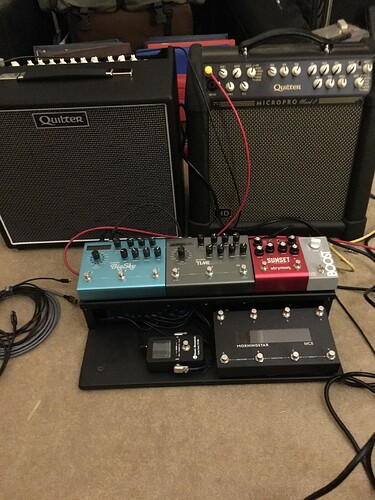 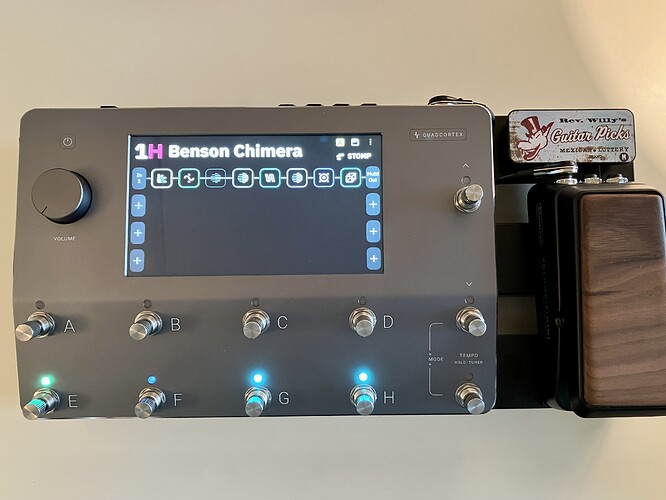 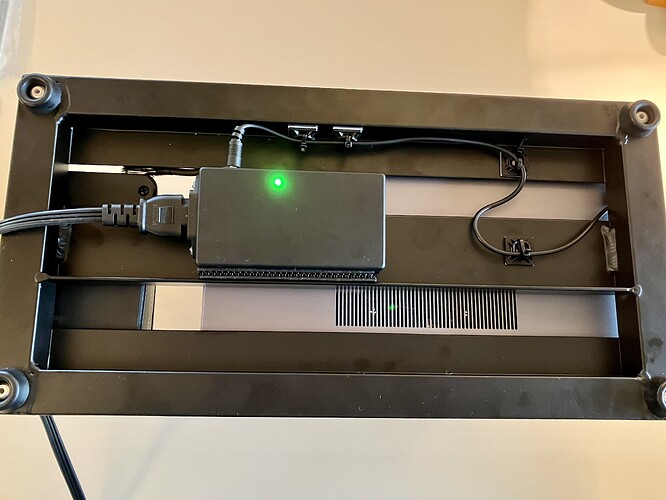 Hows the Sweetfoot power supply? Just ordered one, but it hasn’t arrived yet.

I’ve only had mine for two weeks, but it works perfectly so far!! 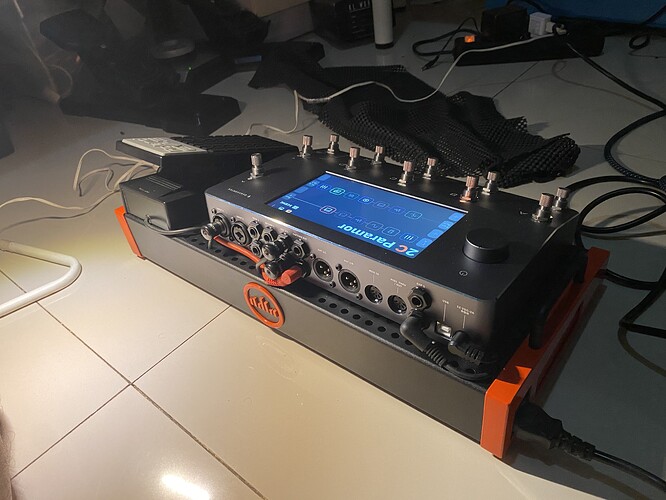 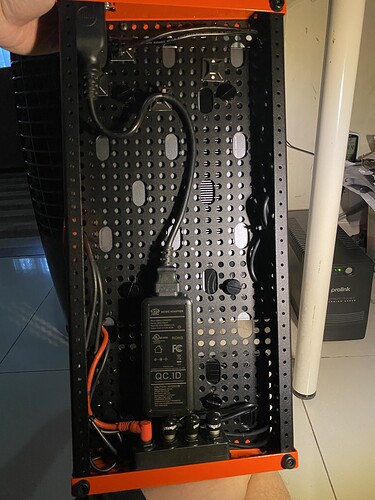 QC/Roland t8 / boss sy200 / expression and the plus pedal 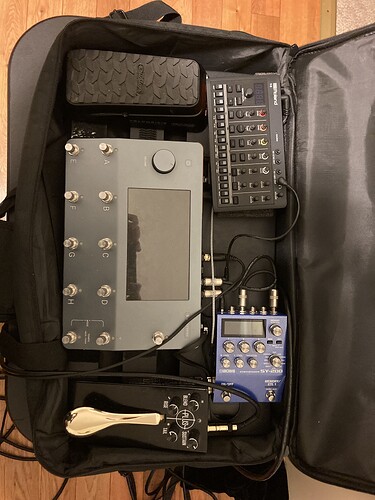 Hello, can you tell me what model case is this?

Gokko pedal board Amazon…. Fit the mxr dc brick, and the dreaded QC power adapter perfectly zipped up underneath. Bag is cheap but holds a lot and has a strap. Super convenient and very affordable