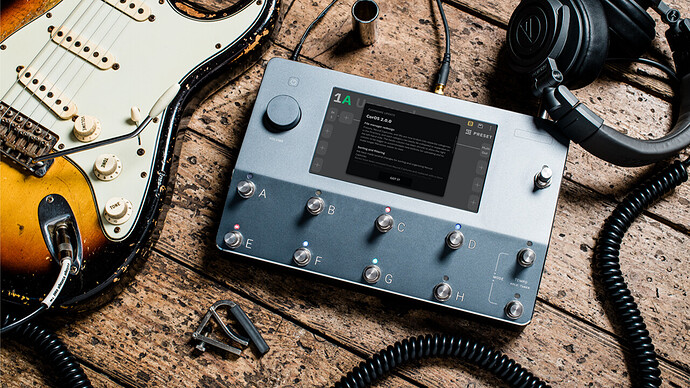 OH MY GOD YES, question while it’s downloading, what changed on the updated amps?

This is a nice surprise. I went to turn on my QC to get some captures I saved and got hit with the update message.

Time to geek out!

Well, this is most excellent, indeed.

Is the new IR Loader block still limited to 37ms ?

That pedal should have been around for a long time.

Okay, first: I just love hybrid mode and it works amazing. With hybrid mode I could get rid of a lot of blocks in my scenes and still get what I want. With that said, it’s quite frustrating that with less blocks in my scenes, it says that I can’t use the global eq because of cpu usage. CPU monitor says I am using 26%. Why is that?

The only thing I’m disappointed about is that when tapping tempo it still opens the tap tempo screen which is frustrating. A small notice in the corner would have been enough.

Havent heard anything about the desktop editor with Cor OS2.
Is this still in progress?

I have seen that CPU error as well. Strange.

What is the “IR millisecond file to use” for the IR LOADER ?

Are the new factory presets on Neural’s cortex cloud somewhere on the device after updating or do they need to be added manually?

Edit: perhaps I’m misunderstanding, are they just additional presets made from the new factory captures?

They are updated factory presets etc.

millisecond for the IR LOADER

Yeah, i got it too and whatever it was i was doing shouldn’t have been using that much cpu power.

Maybe I’m just missing this, but are IRs going to be able to be shared amongst users similar to captures?

if you are having CPU limit trouble with the Global EQ, are you spreading the preset across both sets of lanes to utilize DSP efficiently? This has helped some with that issue

No, 3rd party IRs will default to a factory cab etc. This prevents sharing of purchased IRs via the QC/cloud ecosystem.

Thanks to all who have been involved in this Update!

Went through the factory presets and it’s so much more enjoyable.

Everything sounds better to me now.

Thank you very much!

I was having the same problem… So i did some research. It turns out that each line of effects is assigned to a certain processor. Your total CPU is 26 percent, so you are probably maxing out one processor, so non of the other processors are doing anything. Does this make sense? Its kinda hard to explain.
Have you tried spreading your effects out on multiple different lines? Thats what worked for me.