The Quad Cortex November Development Update is up

From the update as of today:
"The CorOS 2.0.0 beta is still in progress. A new build is being prepared fixing several issues found in the beta. Provided no showstoppers are found in the new build, we are confident that we should be able to release CorOS 2.0.0 before the end of the month.

Thank you for your patience."

So we’re patiently waiting to find 2.0.0 under our Christmas trees?

It would be a great addition to the presents under the Christmas tree if it does gets released before the end of the month!

That was short and sweet. Looks like a fine Christmas present.

For what it’s worth - I currently lead a team of developers, and if the message I deliver to the various stakeholders in the process is “wait longer”, it’s because it’s beneficial for all involved to wait longer!

Undercooked code is a bad time for everyone.

Reminder to everyone to keep things constructive otherwise I will need to lock this thread and issue ban/warnings. I think most people here want to be part of a positive community, so lets try to keep it that way

If we could release CorOS 2.0.0 tomorrow we would, but there are real people working as hard as they can to get this update released correctly, which can take time. We appreciate everyone’s excitement and look forward to sharing it with you all.

This is not a computer game where you can wait for the hotfix and eat a burrito in the meantime. There is no room for error with a device like this. Imagine standing on stage and the software bugs around ruining the whole bands performance. So better be patient and wait for a few weeks more than screw up the whole gig. Take your time, NDSP!

All you guys had to say was,

Any ideas on what will be included in this update? Amps, pedals, features, etc. 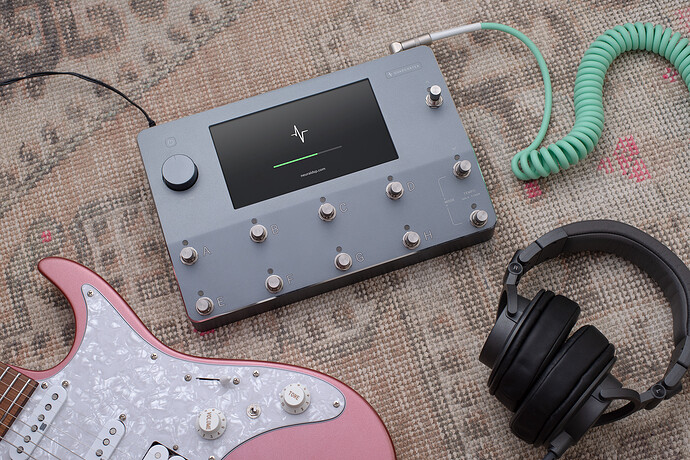 @Dollmaker not even to mention the fact that it’s possible to brick the SD cards with updates and/or filesystem changes like this, resulting in thousands of units needing repair. Definitely better to wait for it to be right

Absolutely - it’s a major upgrade (to a 2.0), and the little that I know about development works is that it’s better to wait for bugs to be ironed out prior to releasing than a half-baked product.

Looking forward to it!!!

From experience in working in the IT and online world, my take on it is I’d rather wait for it to be done and delivered correctly than have the release then complaining when another bug release has to be made. These things do take time.

If you purchase on promises of future enhancements, then build your own expectations on WHEN those promises will be fulfilled, you will always be disappointed. Of course we all want everything, and want it immediately.

Would you have rather had the product delay it’s initial release until it had every feature you wanted? If that’s the case, then you hold off buying until the product has all those features.

If you bought based on promises and features to come, then allow the process to happen and enjoy the QC for what it is today knowing it will be better with each new revision, you may find it’s a right proper piece of kit.

Coming from a career in IT, I’ve been very impressed with Neural’s quality control and release schedules. They work hard not to make their install base into beta testers and instead hold back releases until they are VERY bug free as a general statement. I’ve had a lot of experience with aggressive release oriented SW development and it usually means most of those “updates” are just bugs they are fixing when using their user base as beta testers.

You always have the option to sell your QC and try to find something else that meets your “today” needs instead.

Review the development updates for the most updated news regarding future upgrades and content:

As a prior Software Product Manager (at a different company), I was responsible for preparing product updates to share with the customer base, much like the updates being shared on the Neural webpage. Setting expected release dates is by far one of the most difficult tasks.

Managing customer expectations is never trivial, and someone will always be disappointed/unhappy. Software updates are always challenging, and major updates take extensive testing. I’m just as excited as most to see 2.0 in the future, but I’m willing to wait for a stable build, rather than rushing it. The alternative is a significant number of dissatisfied customers, and urgent development patches.

Take your time Neural; get it (mostly) right the first time. I suggest we all wait patiently.

Personally, I don’t mind waiting for the updates to be pushed when they’re ready. There’s a reason for thoroughly beta testing the OS before it’s released. I think we’d all be even more frustrated if updates were pushed to the public that haven’t been fully tested and are full of bugs and other performance issues. I believe the QC promises will eventually be fulfilled. At least we haven’t been waiting as long as Tesla owners (myself included) for Full Self Driving which may not come in my lifetime! I’m sure we’ll have a desktop app before FSD is 100% working.

Ditto… and yes on all points! I am excited to get the 2.0 release, but would rather wait an extra week or two and get a clean release. And, I am excited to receive the email that says “IT’S HERE!”, too!

Is this an update?

It literally says November update in the title lol.