…this is a continuation of my splitter block thread that got locked.

I cleaned up the routing from the last thread so I’ll start with this as a reference: 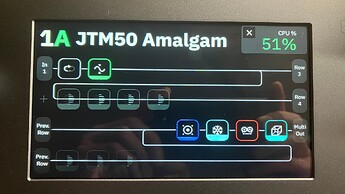 When I turn ON one of the capture blocks here, the output is louder and harsher than another, simple preset that only has the same capture and no jump to row #3/4. 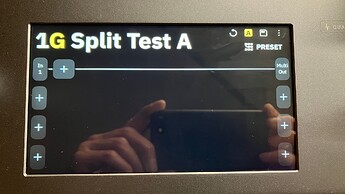 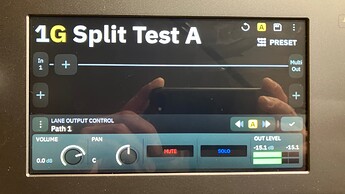 With the splitter across the rows: 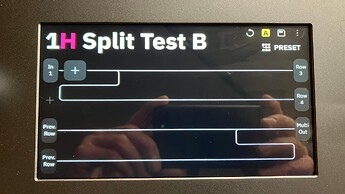 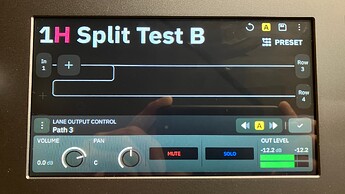 The 2.9dB difference seems like a lot smaller number than the difference I hear in my ears.

Am I on a wild goose chase? Should I just work around this with more simple presets and no jumps across rows, adjusting output as required?

With the amp capture on a split: 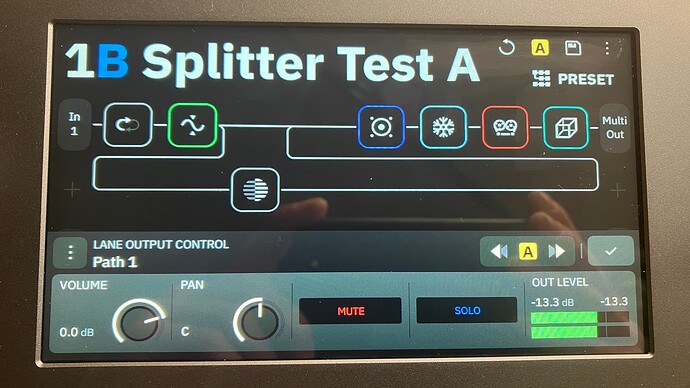 With the amp capture inline: 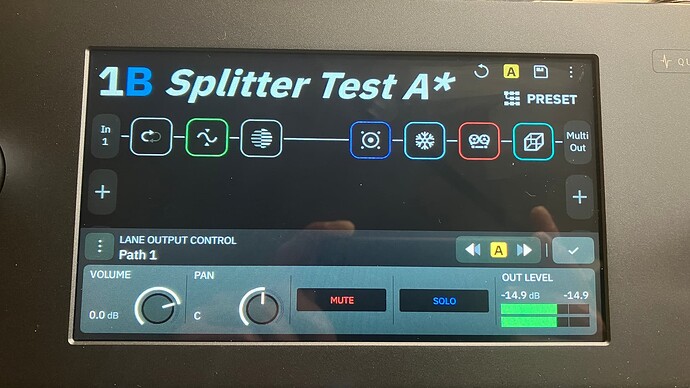 The tone isn’t the same at all and there is a 1.6dB difference!
Now I don’t trust this thing. I don’t want to use rows or splitters or multiple blocks. WTF!?

Am I missing something in the Splitter window here? 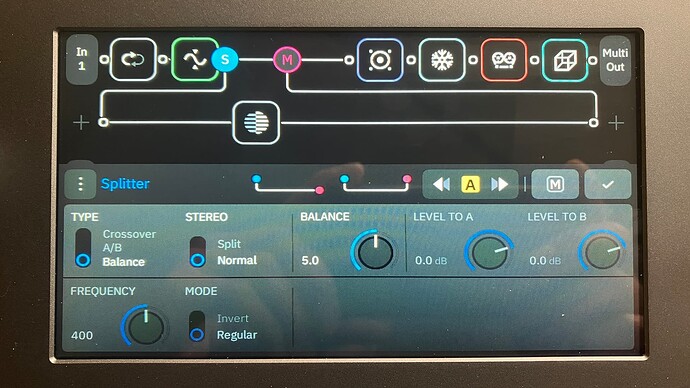 Looking at your split settings In your second set of photos, it looks like you might be comparing apples to oranges, although I could be incorrect. For the routing to be the same in both examples, 100% of your signal needs to be sent to the splitter/mixer row with the capture in it. Set the ‘Balance’ = 10.0.

Do you get the correct results setting the ‘Balance’ = 10?

Hey that fixed it!

Turning the “Balance” from 5 to 10 made them…uh… Balance out!

—EDIT– Wait, that’s not right. The problem was that they were balanced; 50% on the main row, 50% on the split. Turning it to 10, er 100% means all the signal goes through the splitter leg, where my captures are.

Hi @JLantz and looks like your splitter issue is now resolved? If so,I’ll close the thread etc.
Thanks @HonestOpinion for the resolution!

Turning it to 10, er 100% means all the signal goes through the splitter leg, where my captures are.

Exactly, you got it! A common usage of the balance at 100% (set to 10) is when users set up long serial routes, connecting the end of one row to the beginning of the next. Often for presets that use many blocks.

Whenever you are looking to just connect sequential blocks serially, rather than do any parallel processing, setting the balance to 10 is necessary to ensure the processing is identical to the way it would be processed if everything was on the same row. You can think of it as one long row conceptually at that point. Provided or course that if you are merging back into the top row, you are not skipping any blocks in the top row between the split and the merge points.

So what is the “Balance” for? In what situation would you want it less than 10? This makes sense, but I’m confused and have heard the same issue in some of my presets.

In what situation would you want it less than 10?

Good question that could probably be better answered by someone who uses them more extensively than me. I have seen some incredibly clever uses of the split/merge in user created presets.

There are many scenarios for a splitter not being used for a serial connection and therefor the ‘Balance’ not set at 10. You use parallel processing when your preset requires part of your signal to get processed differently than another and then merged back together, or even sent to a different output. For example, you may not want your reverb processing your delay. Your upper path gets part of the signal through the reverb while the remainder of the signal is processed through the delay - merged back in after bypassing the reverb.

Another scenario would be setting up a second cab in the split/merge route. One cab may be brighter than the other so you can use the balance to change the tone by sending more signal to one side of the split than the other.

The splitter also enables you to tap part of your signal to another output. For example, if you are using a conventional guitar amp/cab you might put a cab block in the split/merge path to go out to FOH, while your main path sends the signal to your stage amp/cab with no cab block.

All of the examples above require the balance to be set at something other than ten.