The looper is great, but it’s not possible to engage performance view from scene mode (as opposed to stomp mode).

This can be done with MIDI CC48 but not with an assignable expression pedal (e.g. footswitch) nor with any other way on the QC in scene mode.

Yes please.
Love scene mode for gigging, but cannot access looper for live interaction. Just needs to be assigned a button.
Thanks

I think this would end up being some function of hybrid mode and what it “evolves” to at some point. The first version expected may get this done - maybe not…we would have to see. I can however keep the looper open (on the QC) and go any stomps or scenes I want but I have to use the MC8 in order to do so.

Oh yeah. This is a definite must have!

Other than messing with the Looper at home/studio, it’s pretty much useless in a live scenario without an easy way back to Loop view when in Scene mode… seems like a massive oversight by the dev team… clearly the folks designing this stuff don’t actually perform live…

For a live scenario, you can trigger the looper with an external midi pedal

Haha, no offence but that’s a pretty crap solution… I may as well bring a dedicated Looper…

Whatever works for everyone. I personally use an Airstep to switch between modes as I find it way easier to just use the QC switches for all modes, as any type of Hybrid mode would take away switches, and is more faster and reliable then pressing on two switches at the same time. So if one button from my Airstep is used for the looper it’s not such a big deal, for me. (And it’s way smaller then most midi controllers I have seen people use)
Also I do use and external looper as well, the QC one is fine for a quick loop on the fly but it’s only a one channel looper 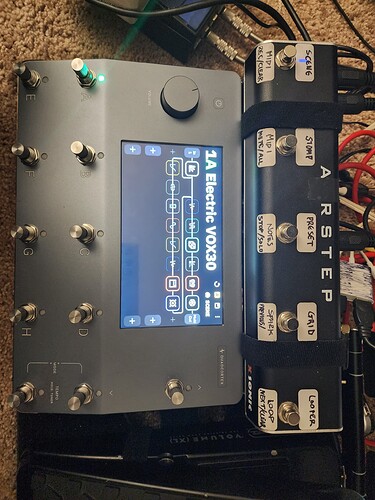 This might be accomplished in HB mode when it comes out. The midi pedal (I use a MC8) is a great solution and also provides a lot more function than just a loop pedal in the EF loop.

Any expansion to the looper functions would be a plus!

Another bump for this. Just makes sense for this to be an option. Glad I’m not the only one wanting to use it this way.

Hybrid mode solved this, has it not?
At least to me the looper is at least usable now.

Hybrid mode requires to split the footswitches in two, so if you just need the looper and want to work in scene mode, you lose four scenes.
It’s workabke in most cases, but better solutions would be tio let the user reconfigure the “tap tempo” button (which, I think, is useless for many users) or implement a “current scene” button like Boss does.
I don’t care, personally, because I have an external SY-1000 on my pedalboard and I have plenty of additional buttons to configure, but still it would be good for many users, as far as I can tell.