I have a Senheiser 421 and a SM57 , and I’d like to try do a capture with both Mics going to each input?

Can I do that, or do I need to run the mics to my mixer and run the blended monitor out to to the input of the Quad Cortex…

I already have great mic’d tone set up.

I bought the Quad Cortex for when I’m traveling.

Hi @MightyMikeAmps and welcome to the community! Currently, you would need to mix both mics as you can only capture using one input.

Thanks… I was leaning that way because my tone coming after my mixer into my MAC is absolutely stellar.

It’s all coming from a Soundcraft Impact SI…

This is going to sound crazy… but could I take the USB out from my Mixer (that normally is connected to my Mac), but instead go into the Qaud cortex for my Capture??

@MightyMikeAmps You would need to come analog out of your mixed into the XLR input of the QC. Then you can just turn down the mic pre gain on the QC to line level now that you’re getting your mic gain from your mixer and you should be good to go.

I have been using my Chandler TG2 to blend 2 mics together for captures and it works great.

I agree, and think it’s going to sound great from the monitor out. You need that NEVE to make a SM57 not sound harsh.

Some clones… A 68 Superlead, and 67 Black Flag 10000 series with Merren Iron, and a couple JTM 45/100 Dickenson spec builds (one with Heyboer and one with Merren iron),

I also have some other amps (I might need an intervention),….an old BF Super Reverb (with Mercury OT), a Blues Jr, BE100, BE50 Deluxe, SUHR PT -15 IR, and a 64 VibroVerb RI CESAR Diaz mod amp that I’m in the process of using as a guide to build a 64 VV from old parts which is the current Rabbit Hole… I already have all the parts including old 15” JBLs and EVs to try.

I’m nothing special as a player (I’m ok)… I just love to play and know how to get great tone. So far I haven’t heard any Captures that sound as good as my amps, (including mine) when I made a capture just going from the mic into the QC…

I really think captures from the monitor out are going to be a game changer, and I might actually blend 3 mics off 2 cabs since the channels are already set up and dialed in and sound great… Just like the amp tone!

. Right now they all have SM57s , but I’ve been itching to try that 421….Between the different speakers/ grill cloth, and mics; it should really cover a full range of tone…

I’m just an old Trucker… but I still have some inventory from when I used to build amps and gig.
I have the QC in the Semi with me while I travel, and I’m sitting it the truck stop typing this , and getting ready to fire it up!!

Very cool! Post some video of you playing in the truck!

Yes it is. I use my API preamps with a 421 and a gefell condenser to capture. But you need a mixer to sum both mics to a single output, since the QC only allows to use one of its inputs for capture.

I came from the kemper and as the QC have 2 preamp mic entries I thought it was possible to do it.
I remember a lot of Kemper users using a mixer to make 2 mics profiles so when I saw the QC i assumed it was a feature of it without the need of a mixer.

Do you think it’s something that could be coming with an update ?

My Mixer already setup and EQ’s to where those mic’d cabs sound just like the amp coming out of the monitors. I’ll have to disable time based features on the pedal board, but it should be good to go when I get off the road next week.

I had to buy a ground hum isolation box for the return to the QC. That should arrive before I get home. Hum was really bad.

@MightyMikeAmps I would highly suggest you make some impulse responses of your set up as well while you’re at it. Find a perfectly clean solid state amp like a Seymour Duncan power stage and use that to make some IR’s of just the cabinets. They will come in handy some day. I have found that doing DI captures of the amps, then using the IR’s of my cabinets are much more accurate than capturing the amp & cab together as one thing. If you need help, I’m happy to give a more detailed explanation or help you get things set up.

What’s the name of the device and configuration used. I also have heavy line noise and like the tone. I have been using the EV-5 for volume control but need to kill the noise. Thx in advance for any help.

@jeekytom are you referring to what you should use to eliminate ground loop or hum noise that sometimes happens when connecting the QC to an amp or pedal? I use an Ebtech Hum Eliminator. Works great when I need it. 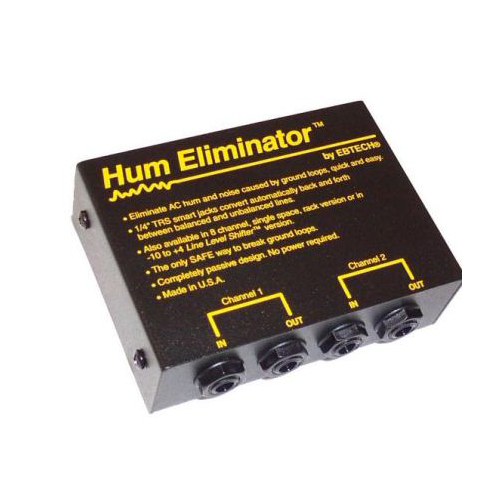