Hi. I’m experiencing some latency (at least for me) while playing the QC. I’m not using any serious amount of CPU, just an amp + cab configuration. The latency is still there even if I load a blank preset. Any suggestions? Playing with such delay is too frustrating for me. I have this unit since yesterday.

I may be less sensitive, but I don’t feel any latency, even on crowded presets.
I think there is a youtube video where somebody tried to measure the latency, but not sure if the method was accurate. Results were mostly around 5ms.
If my math is correct, this should have a similar effect than standing at a 1.5m distance from your speaker.

Short answer would be: no, there should not be a noticable latency.
But maybe others can comment as well.

@tiny_donuts
There’s latency in any and all digital modeling pedals. LIne6, Kemper, Strymon… anything that converts your guitar analog signal into a digital signal so it can be processed then back into an analog signal creates some amount of latency (delay). The trick is to do it in a way that the delay is so small that it’s imperceptible.

I have done some measurements on the latency of a couple modelers. (Yeah, I know nerd alert). Anyway…. The more blocks you use in the QC the more latency is added. The more complex the process the greater the latency. Now the latency is small, but it does exist.

When compared to the Kemper just using an amp profile in the chain with no effects, and a capture with a cab on the QC- the QC had less latency than the Kemper.

Some folks are more sensitive to the latency than others. If you’re accustom to playin on stage hearing your amp from say 8 feet away, you probably don’t notice it as much. I notice it more when playing using inear monitors. Especially when I’m listening through a crappy inear monitoring system that itself has lots of latency (I’m looking at you aviom).

All that being said, you should not really be hearing anything crazy, especially if you are playing an empty preset. So how are you listening to your QC? Headphones? Speakers? Let’s see if we can figure out where you’re getting the latency. Using the analog outputs of the QC? Or the digital outputs? Do you have anything in front of your QC? Pedals or a wireless device?

What outputs are you using?

yeah, I know, its been 10 years now since I’m using digital modelers. I also have daily access to a Kemper rack and I had an helix LT till a week ago. No noticeable latency on these two devices. I tried to build up cpu usage by loading multiple captures but I felt no changes with respect to the blank preset. My setup is easy: qc straight in my studio monitors via xlr cables. The same issue occurs via headphones and trs outputs.

the two xlr outputs, straight in my studio monitors. The problem occurs with all the other output though…

Have you updated to the latest 1.4.1 firmware?

Might be worth doing a little experiment to measure the latency you’re experiencing. Plug the output of your guitar into the input of a direct box. Then plug the through jack from the DI into the input on the QC. Plug the XLR out of the DI into channel 1 on a DAW. Plug the XLR from the QC into channel 2 on the DAW. Record a couple loud percussive sounds with your guitar. Then zoom in and measure the distance between the start of a waveform on the DI track and the start of the waveform on the QC track. That will give you the latency. Depending on the time setting of your DAW, it will tell you in seconds, samples or whatever you like. Maybe try it with a blank default preset, and then one with a capture & cab and see what you get.

Yes. Anyway, it seems now that the problem vanished by itself. I’m not experiencing latency anymore this morning…

Thanks for the suggestion. I will surely do a test in the next days. Anyhow, this morning my latency issue strangely disappeared on its own… let’s see. I will update this post if the problem returns.

One thing I notice is that the gate settings on many presets (sometimes built into Input1, not even a block) creates a slight delay while the gate opens up, and it feels a bit like latency.
But if you started on blank preset that should be off by default, I think.

I’m curious about this latency test myself, and might try it myself. 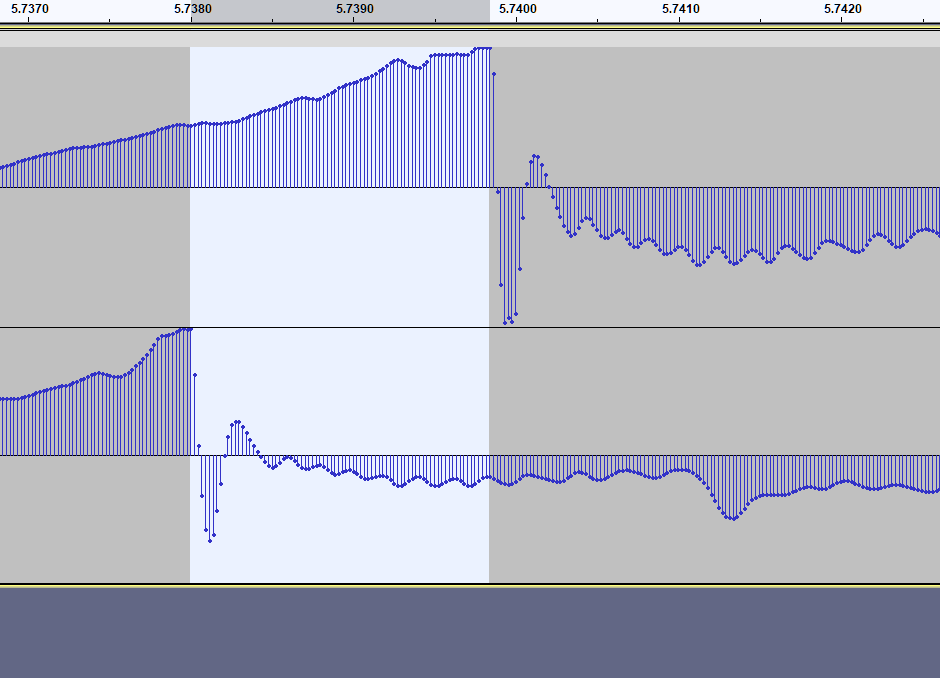 Less than 2ms latency. This is me just smacking the strings to get a very clear peak. Left channel is from the QC, Right channel is direct from the guitar. I used a really basic splitter cable to divide the signal, no processing from that point. One side went directly into my interface, the other went into the QC on a fresh blank preset and then out to the interface. The interface was a Presonus 26c.

If you run into issues again, we’re happy to assist. Email us at support@neuraldsp.com thanks!

You can precisely measure the real latency of your interface thanks to this open-source tool: Oblique Audio - RTL Utility
You will see that the QuadCortex driver is not optimal in terms of latency when compared to other interfaces.
Here are some measures I took on my devices connected to a Macbook Pro:

Please read the last column for the effective latency measurement.

Thanks @xtian.bonnin. I could be wrong but I think what @tiny_donuts is talking bout is the latency when playing the guitar just using the QC and not the overall latency when using the QC as recording interface. But that is a cool utility.

Yes you are right. That’s another topic.
Nevertheless, I think it is interesting to compare the performance of the QuadCortex in terms of latency when it is used as a sound card with a computer. This is the only way, currently, to be able to take advantage of the Neural DSP plugins!