I’m really sorry for the duplicate posts. This is my first time using the forum and I don’t know how to make my post go to the proper section.

Can someone tell me if there is yet a profile of a “Brownface” (or “Blonde”) era 6L6 Fender amp?

It could be the Pro, Super, Showman, Vibroverb, Vibrosonic etc, (anything using 6L6) although I would really prefer the solid state rectifier with a “presence” control, which would be either the “Pro” or the “Showman.”

If yes, where can I find it?

Here’s an unofficial list of devices on the QC:

You can search the cloud for captures, just know they won’t have controls like the models do, only rudimentary ones. 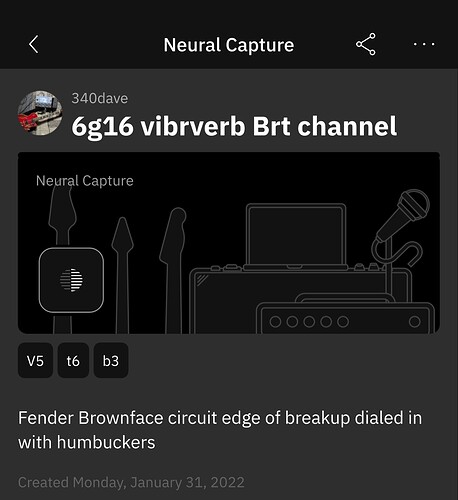 I’m actually looking for something dialed in with single coils rather than humbuckers.

This is for surf guitar a la Dick Dale.

The 6G16 Vibroverb is a nice brownface amp although it does lack a “Presence” control.

In any case, this should be close enough for now.

It’s a great resource, but it’s based on version 1.3. Newest devices are not included.

If you have a brown face model you have dialed from a plug-in or another modeler you can easily capture it. AF has some great brown face amps.

What does “AF” stand for?

Axe FX. If I get to make a capture of mine, I’ll send it along.

Can you do me a favor?

Can you make a short audio recording with this capture here and post a link? Can you try to make it sound like a “surf guitar” (e.g. Dick Dale)?

I don’t currently own a Quad Cortex; just curious if this capture here can be made to sound like “surf guitar.”

I think it depends on what someone like Dick Dale used. I have both an FM9 and an AF3. All the amps are the same. But to be honest that sound is more about echo, reverb than the specific type of fender amp. I would try a super or deluxe - maybe stay away from a twin. Most of the sound with AF lies with the IR. As I mentioned I may be able to get to making a preset for it.

When people say “Twin,” they usually mean Blackface AB763, which is identical to the Brownface/Blonde 6G14 except for the tone stack.

It’s the tone controls that differentiate the Brownface and Blackface amps.

Anyways, in conclusion, you need a Brownface or Blonde (6G series) amp to get the true “surf sound” because the fatness of the mids depends on the tone stack of these amps. Any of the 6G Brownface/Blonde amps that use 6L6 tubes will suffice, though. If you look carefully at the schematics you’ll see that most of Leo Fender’s designs were very close to each other. So that 1963 6G6-B Bassman profile by WT should work fine.