Having trouble getting a truly clean sound with any amp model

I’m trying the Jazz Chorus amp, assuming it’s gotta be one of the more clean amps available on the unit. It still gets really crunchy with anything I put into it. I’ve got two guitars I’m testing it with, one has P90s but the other has a regular strat single coil surrounded by “twin blades” which I know can be pristine and clean sounding.

One of the closest truly clean setups I’ve tried is one of the Cory Wong clean presets, but that is dull and lifeless. No chime in the sound like I’d expect considering how much spank he has in his tone.

So yeah, what amp/cab/settings can I try as a starting point for a really clean platform?

Might be a problem with your monitoring system. But try turning master volume up and drive/gain down.

Have you tried adjusting the QC input level? Reduced the level going into the model? and remember even most “clean” tones are still only sparkly or spanky or chimey because they aren’t actually “prisitine”

I’ve had the most success with turning down the input, the gain/drive, and even the master a little while increasing the output knob and/or increasing level after the amp for makeup gain. I’ve also found the HiWatt clean is very nice and chimey so that’d be a good model to start with

There are so many good captures available on the cloud. Try any of mine and just turn off the overdrive pedals for some really nice cleans. All of my presets clean up really nice if you turn overdrive off. Lots of other guys with great stuff as well.

I’m TheToneRanger on the cortex cloud.

OK, so I messed a lot more with the I/O settings and turned down my guitar input back to 0.0. I wasn’t redlining anything, but figured it might help.

Then I found that when I went to the outputs that the Multi and the Output 1/2 settings, of which are all independently controlled per preset I guess, depending on what the output is selected as, anyway, those were causing the headphone output to redline. I turned down all the outputs I could uncover through a few different presets to -12db and now the headphone isn’t redlining. It’s a shame that the output knob in the settings for the headphones doesn’t address what’s hitting the phones, but rather attenuates that going out. You have to lower the other outputs to get the headphones to not be overdriven at the output circuit, even if the actual volume isn’t going to distort the headphones.

This probably will change how things hit my PA speakers as well, but I haven’t tested that yet tonight.

So with that all together the cleans are starting to make more sense.

Getting the I/O settings on this is proving far more user-intervene than the Helix that I just came from, where this was never an issue.

I’m confused - couldn’t you just have turned this down? 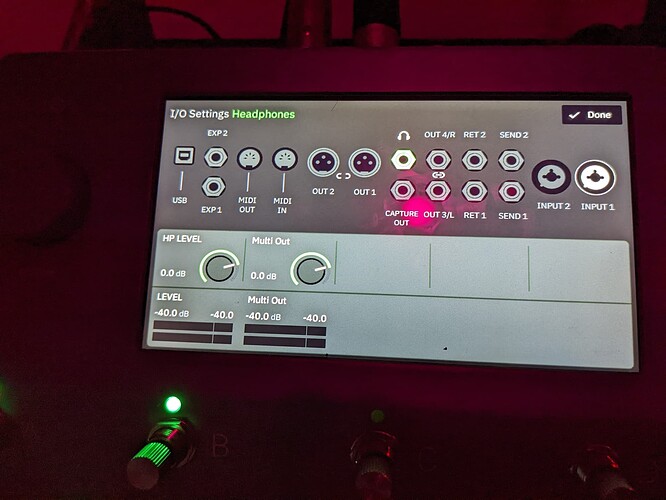 That doesn’t change what’s going into the HP, it changes what’s going out of them. If you are feeding a signal too hot, it’ll go into the red, and even if you -40 the HP Level knob, it’ll still be distorting, you just won’t hear it.

I made a video showing this:

Worth mentioning for us still relatively new users that may have come over from modelers with simpler headphone implementations, that when you select the headphones output from the I/O view, you are essentially looking at a mini mixer for the headphones feed. Any output you have selected in your preset, e.g. “Out 3” or “Multi Out” shows up on a per preset basis on I/O view’s headphone page.

Took me a minute to figure out what was going on when I first looked at the available controls on the headphone page and then realized they were changing from preset to preset. Mind blown! That there could be less or more knobs showing on the headphones page depending on what my output blocks in the preset were assigned to. Also, those controls, as they should, pertain only to the Headphone mix. They do not change the settings on your output blocks, nor does changing the level on the output block change the corresponding control in the headphone mix (although it will change the “pre” level of that feed prior to the control). All good!

However, I would have to agree with @tjbassoon that there is something very visually confusing and unintuitive about the way the ‘Level’ meter is directly positioned under the ‘HP Level’ as it is not controlled by it. The ‘HP Level’ controls the volume sent to the headphone output as you might expect.
However, the ‘Level’ meter reflects the levels set by the composite of whatever levels are set in the headphone mixer’s available controls. Those available controls are based on whatever you have your output block’s set to in that preset, e.g. “Out 1” and “Out 3”.

Even if it is not intuitive at first glance, Neural may have placed the ‘Level’ meter in the location that makes the most sense from a GUI perspective as you might have multiple outputs taking up the rest of the knob space on the headphone I/O screen. QC users running separate outputs for guitar, bass, keyboards, vocals simultaneously, for instance, will have all those outputs controls (and meters) show up on the headphone’s I/O page. It can get crowded.

The master volume is pretty much controlling all outputs right now (firmware 1.4.1) including the headphones level. I suppose this could change in the next or some subsequent firmware update as it is going to include more granular options over which outputs the master volume knob controls. I find it interesting, as @tjbassoon observed that (in addition to the I/O pages ‘HP Level’ control) although the large master volume knob affects the overall level to the headphones, it does not affect the headphone meters.

Anyway, I am really impressed by the “mini-mixer” that is on the I/O page’s section. It is just full of capability, flexibility, and promise. Maybe it gets tweaked along the way but what an awesome foundation to start with. Thanks, Neural!

Btw, tip: If like me you tend to have a monitor still hooked up and switched on when you go to use the headphones, you may need/want to mute it. You can tap on whichever output the monitor is connected to in the I/O screen and there is a mute switch there. Or just turn off your monitor!

Useful to know though if you are switching back and forth between headphones and monitor. Also, worth noting that if you mute the output directly from an Output block(s) in the grid/edit view, it will mute the signal to the headphones as well. Instead, mute the output by selecting the mute switch for that output in the I/O view to prevent it from muting the headphones.

At the risk of being redundant via further clarification, maybe it might help troubleshoot a mysterious lack of sound for someone sometime, or maybe this just seems incredibly obvious: You can mute an output from either the output block in the grid view or from the I/O view - OR BOTH. The output blocks in grid view are in some respects a subset of the corresponding output icon in the I/O view. For example. you might have multiple output blocks labeled ‘Out 1’ in your preset, but only want to mute one. Do it from the grid view. By way of contrast, muting ‘Out 1’ in the I/O view, mutes ALL occurrences of that output block. Muting/Unmuting from either view, grid or I/O, for good reason, does not change the state of a mute you have set in the other view.

Sorry about the lengthy post, wasn’t my intention when I started.