What is a proper input level? And how to choose the right impedance?

I always wondered what a good input level would be to begin with. Trying out different presets by other users I noticed they sometimes sound way off. When adjusting the input, most of them turned out good. So I guess many users are dialing in very different input levels.
Is it better to reach a level that is close to clipping (close to -0dB and thus turning red at peak volumes of your instrument like on a typical interface)? Or should one rather stay at lower volumes so the preset and the blocks within have more room to play?

And obviously the impedance does matter too. But how to decide on that? And please don’t answer with the obvious “use your ears”-phrase. 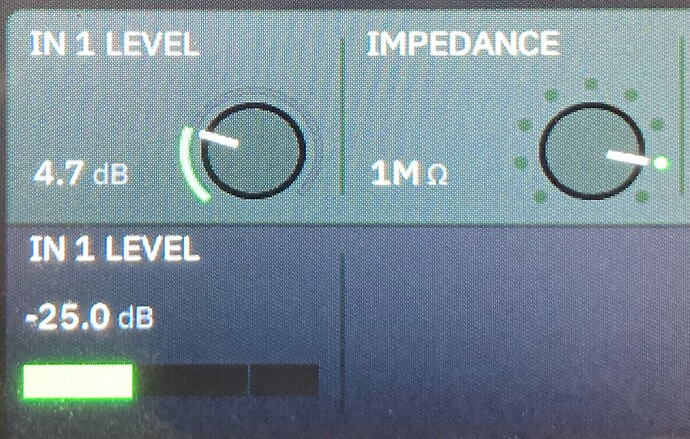 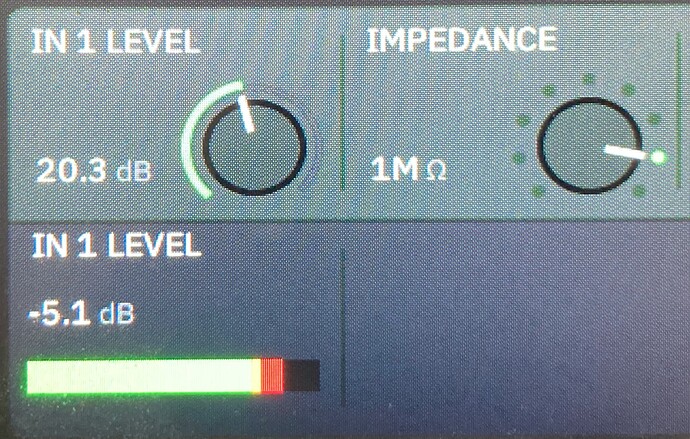 IMHO the level should be as high as you can get away with.
The goal line is the small break in the bar you can se in your first screen shot.
Anything above that will cause clipping.
I always hit the lowest note harder than I would playing regularly and adjust the input to be just before or slightly clipping, so I have some headroom.

Worked like a charm on the Helix and on the QC.

As for impedance I played around with it and didn’t notice a drastic difference, so I just left it at the default 1M Ohm.

In the analog/tape world, you always tried to keep the signal as hot as possible to get the best signal-to-noise ratio. And a little analog clipping was actually a bonus. The digital domain is the opposite. With 24-bit A2D and D2A, you don’t need to worry too much about the noise floor and digital converters don’t introduce noise as tape did. However, digital clipping is something that is to be avoided at all costs. There is almost no such thing as good digital clipping (bit-crusher might be the exception if you’re into that sound). So being conservative on the input level isn’t really an issue. Better to be a little lower and avoid any digital clipping than to focus on driving as hard as you can.

QC inputs set at 0dB will pretty much take a Humbucker pickup flat out without any issue. So unless you have unusually weak or strong active pickups, I’d set input to 0dB and not worry too much about it.

So two answers with two different views so far. Exactly what I hoped for

I noticed that the signal coming out of the QC with no effects / cabsim / etc. is about 5 dB weaker then when going right into an amp / interface.
So I have the input set at about +5dB to get the same signal level as I would not using the QC. Then preamps, compressor and drives (and amp+cabsims if used without a real amp and cab) will bring it up about another 10-15dB.
To me this sounds very much like my analog pedals sounded. However when creating a capture, I set the input as hot as possible to get the best results. And that is really weird to me.

Another perspective:
Initially I boosted the input, just like you’d do with an interface. But then all the amps behaved very odd. E.g. a DLX or Super Reverb model still distorted at Vol around 2, with vintage single coil pickups. And overall, every effect and/or amp model clipped way too early, it was impossible to set up my signal chain like I would with analog gear.
Then, I set the input to ± 0 dB, and my life changed

Now all the models in the QC perform and feel pretty much like the analog versions they’re modeled after.
So I suggest, pick an amp model that you know very well from real life experience, and adjust IO such that it does what you expect it to.

I just got my QC, and at first I used the input meter and just made sure I wasn’t hitting the red, cuz I know that’s not cool in the digital realm (as opposed to analog)….but in getting to know the unit just by diving into presets, the high gain stuff was SO fun to play, but I was afraid I was veering toward “insane mode” territory. Cleans were terrific, but low/mid gain presets were kinda ugly. I just decided to try lowering the gain to +4db and I’m already loving this thing even more than I thought possible.

I started my first preset without worrying about that.

It sounds very good. It’s a Friedman with gain at 4. Then I add a drive block (OCD). Fine.

A few days ago I started checking the Input Level.

I find that when I get close to 0 (input level around 8-9), well, the amp model sounds good, but when I add the OCD, there is a lot of compression smashing the sound and I feel it sounds lower.

So I’m going back to default.

I also don’t see any difference when moving the impedance knob.

this is a topic you can’t really answer without the ‘use your ears’ clause. Your instrument, pickups (mic), setup, cable etc- can make so much difference there just can’t be one recommended level in general. The one thing I’ve discovered from experimenting w/ NDSP products is not to be afraid to turn things DOWN; as mentioned in other posts lowering the input levels can greatly improve your clean tones