Anyone a/b’d their captures with original (using a real speaker after the capture)?

I captured my Friedman Smallbox without cabinet (using Torpedo Captor 8, not sure if it’s the best device). It’s a 112 combo with a Scumback H-75.

I also have a matching 112 Friedman cab with another Scumback H-75. So after capturing and getting a few captures I liked, I a/b’d the two setups: a) Friedman Smallbox with Scumback speaker, and b) Quad Cortex → neutral power amp → Friedman Cabinet with the same speaker as the combo. No effects, just the dry rigs.

Now, this is a test in a rather small room, alone and out of band context. Also, there’s the honeymoon factor

Still, I’m not sure I would have easily picked out which is which if blindfolded. It was pretty similar in tone and feel.

Anyone tested this out? The acid test will of course be how this carries over live with a band (one signal going through the PA, another signal without cab sims to an onstage cab). The difference between a solid state and a tube power amp is not necessarily in the tone when you’re listening to it isolated, but how it kicks through in a loud band setting.

I did exactly that recently. Very interesting. Hard to tell the difference.

Cool, and definitely close to the original

What I attempted to try out was how close the capture could be when routing it back out into the room via a neutral Power Amp and using the same speaker as the original amp when comparing it.

I did capture my amp and then compare it back to back with the QC through the Kemper Kabinet. That’s not the same thing either though! 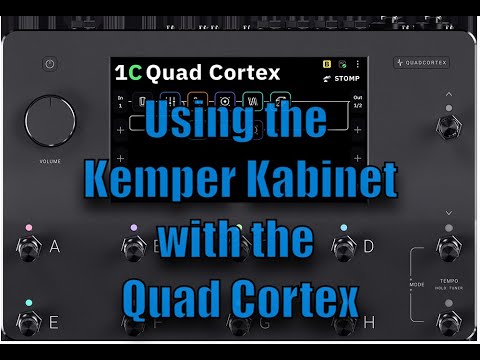