Honeymoon Phase ends how do I feel now?

I really do not understand why people think the QC isn’t usable or versatile for gigging. I’ve had mine for over a year now and have used it EXCLUSIVELY for 4 hour cover shows, studio sessions, writing sessions, big opening slots for touring bands, weddings, and literally every other situation you can think of.

Not one time have I ever felt like the QC was missing a critical feature or was impractical for live use. It’s just a different workflow. Once you get accustomed to it it’s so much faster than anything else I’ve ever used to get exactly the sound you need, even the Kemper I had before and the giant pedalboard/amp combo from the back breaking old days.

If you don’t like the workflow that’s fine, but it’s simply incorrect to say there are critical flaws that make it impossible to use live… that’s an unfair criticism of the most powerful modeler on the market.

oh - haha just pop the wheel cover off then -

Maybe then tell us about your workflow without managing static setlists or doing a step dance on the QC?

What you are describing is literally hybrid mode…you are also comparing the QC with the Kemper, which the Kemper has the tinniest screen available, and as far as the Helix goes the quality sound as you also mentioned is not comparable to the QC.
Even right now the QC supports hybrid mode by just closing the midi loop, and you can even add an extra midi footswitch to change presets or scenes while you are using stomp on the QC switches, all these are programmable even right now just requires a little extra midi knowledge.
I am a guitarist and bassist that uses the QC on live situations all the time, for my original music, for other singer/songwriters that I play with as well as full band and acoustic 3-4 hour cover shows, with pre-set setlists but also changes on the fly. I switched from tons of pedals on the floor, to Ground Control and GC switcher all midi control, to pedals again, and now to the QC, so a lot of adjustments.
Truth is if we are used to something it takes sometime to get use to something else so I understand your concerns, but as someone else mentioned about the workflow, it’s pretty much what you have to get used to and mostly get used to how to set it up now in order to be more to what you are already know.
The 2.0 firmware will help a lot to simplify some of the extra things there are so many changes coming. But if you need any help setting it up the way you are used to with other pedals like the Helix, I suggest just posting it here I am sure people will be able to help you get the most out of your QC.

Its not that i dont know how to use the QC or im “used to something” specific. I already worked with multiple devices, i had a Boss GT, AxeFX, the Kemper Rack, the Kemper Stage, the Helix… all devices were out of the box capabIe of the things i explained and what i want to achieve. And thats simply not possible with the QC. Its also not only hybrid mode, because even when we finally have hybrid mode someday, you still can only have two types of modes. So even if i can use presets and scenes together, i still have no possibility for global stomps.

I use MIDI for setlist changes, or to change to gig view, or another mode, but primarily using scene mode live…using Setlist Maker on an ipad which sends midi to change presets according to the set list we have arranged and the song chosen…the midi settings are static, entered into Setlist Maker so any setlist move on the ipad, or song switch still recalls the right QC preset. Unless you are moving around presets inside the QC, there are zero worries about what preset, what setlist, what bank, etc. You can also send MIDI to change modes, or to gig view, which I will also do from the ipad. Using scene mode primarily for altering a preset within a song for anything necessary - clean, effects, boost, etc. Looking forward to hybrid mode because sometimes I do think stomp mode “inside a scene” would provide more options in a live setting.

Have had the QC since April last year. It’s honestly been my go to. I use it every weekend and midweek when I want to jam. I’ve been able to do may things that I couldn’t simply do with an amp at home.

Set up time has been cut in half. And I’m transitioning to incorporating it in a mini board to replace the whole thing.

Firmly keeping mine for a long long time!

I just got back to NYC after 3 awesome weeks in Japan. Plugged into the QC and I’m a very, very happy camper. Beautiful sounds. Thanks, guys!

With the recent hype Line 6 helix update, I have been playing my analog pedalboard where I have a Hx stomp at the end of the chain for amp/cab simulation to play direct and monitor in headphones. The new 3.5 helix update is awesome and I really like the tones I am achieving with this setup… BUT then I switch over to using the QC and I don’t know what it is… the QC is just better. I don’t know how to describe it… more fidelity, more responsive, more inspiring… words are not enough. Thats all i can say.

Same here. I’m using the Stomp as a travel companion and am considering putting it on my pedalboard. It’s a great unit, but there just seems to be more “air” to the QC. Breathes better, if that makes sense.

Great to hear. I’ve just started my honeymoon phase with the QC this week, and I’ve already A/B’d it with my mate’s HX Stomp with the new update - hands down the QC sounds better (to my ears at least). More responsive, and just have a better feel to it.

I’m also coming out of an UAFX Dream setup (my last board), and even now I’m no longer missing the UAFX. I’ll try to do a capture of my most used setting sometime next week and I’ll probably put up the UAFX for sale.

Use scenes. Put buttons on top row. Try Solutek silver buttons. Less than barefoot buttons. Plus, have rubber inserts and you can pick a pack of 12 that come with l tiny little screws. They look cool and give u extra screws because you will lose one. Pretty sure. I know I did. Never did find it.

Guitarists get bored and we buy I think to inspire us to play maybe a different lick or chord. It’s never ending. We all get bored with everything at least I do and that’s why I personally was buying a lot of pedals. Amps I can control myself but there’s a lot of guitars I fall in love with but can only afford so much. I have the guitar I connect with the best but still always falling in love with another. Re the quad because there’s a lot to explore and I haven’t gotten past the main stuff I need I am not bored with it. It’s staying.

I’ve moved on to a phase in which I haven’t actually looked at the interface or changed any settings in a while. I’ve found a preset I like. I just flip the switch and play.

I’m sure I’ll start experimenting again with the new release, but I’m definitely not second guessing the QC at this point.

Do the screws end up scratching the knobs? I’m close to pulling the trigger on those Mooer Shrooms, but the Solutek stuff looks pretty amazing

I have not looked since I put
them on but I m pretty sure they’ll be fine just don’t go so extremely tight so that they’ll dig in and that goes for any buttons. I do not like the mooer buttons . I just don’t like the looks of them. Everyone has different tastes though. I not only like the soluteks looks and rubber inserts they match perfectly.

I had too many typos at the beginning. Deleted sorry. I need to double check more when I post. Basically said not bored with it. But not giving up my amps or pedals. It is my favorite modeler though in feel and sound and UI.

Show me any live video of Megadeth (or any other “famous” Band) where you see someone of the band “play” the QC on stage. 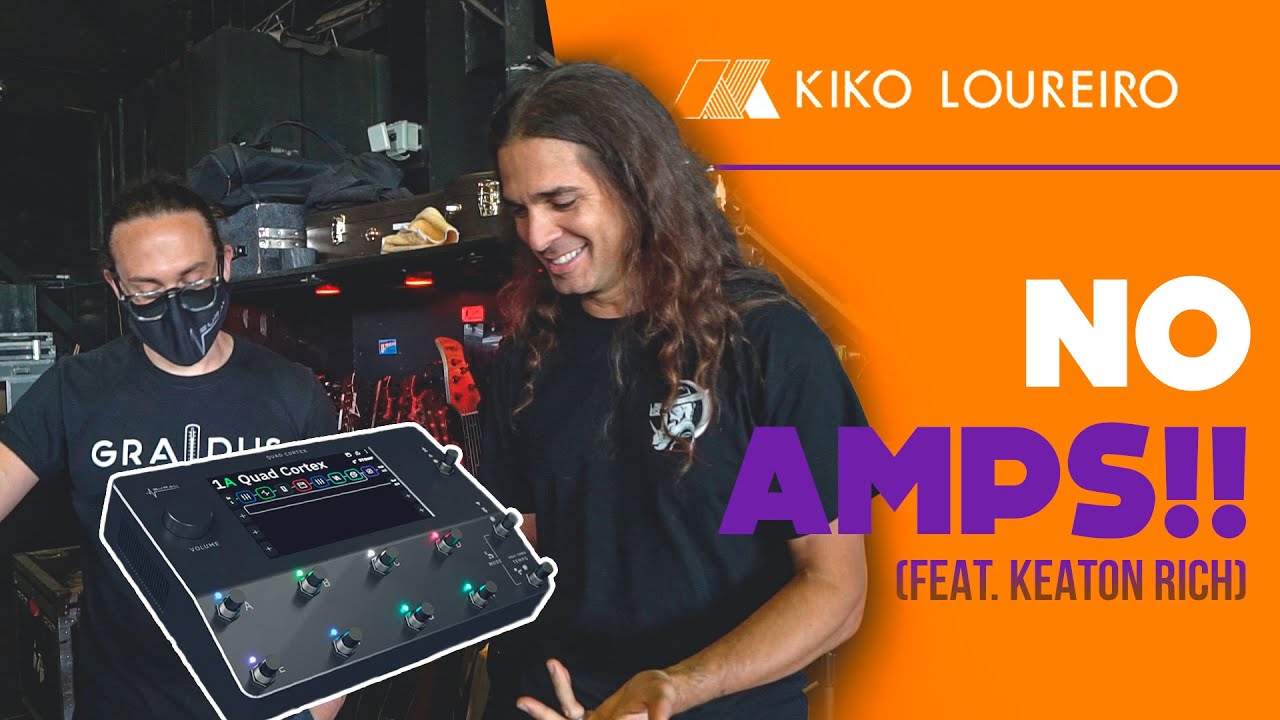 Check out the 2 minute mark…

lol @spikey, you should read my post completely and not just the first sentence, as i explicitly explained my point based on exactly this video…
“These are pre produced shows triggering all changes via MIDI or they have guitar techs behind the stage pulling the strings. That was even explained by Kiko Loureiro himself in his QC setup video.”

There’s a newer video of Kiko and Keaton showing an updated setup (at around 3:25 in the video). They now use scenes that are covering almost all sounds he needs.
Yes, you are right, they switch by midi but nevertheless, I believe it would also be possible to switch these scenes on stage, if they wanted or needed.
https://youtu.be/luRdRfq4jQY