With the additional option to assign multiple blocks to a footswith, it would be nice to be able to edit the name shown in Gigview, as opposed to seing “Multiple devices”, as it is shown now.

I second this. Great suggestion!

Yes. It’s a no brainer, must have.

Thank you for the nice update!!

+1
I wonder how it can happen that this was not done directly. The whole function of toggling mutliple blocks is incomplete without the possibilities of proper naming and color coding

I do find it surprising that this wasn’t included with the function addition.

Yeah, I’m already confused and we’ve only had the new stomp feature for two days 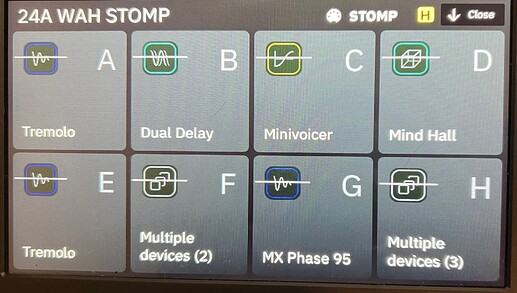 image1920×1088 284 KB
Here’s my gig view of my most used preset in Stomp mode. Two very different Tremolos. Which is which? What does F do? What about H? Hopefully I have this memorized or else I could get a stutter tremolo when I wanted a mellow country feeling one. Or a solo boost+ delay instead of some micro pitch shifts.

Being able to custom label these would make a world of difference.

Yep agree. Very happy to have the multi-block stomping now. Being able to edit name/color seems like the logical evolution.

I’m so stoked over the new functionality in stomp mode! I’ve been stomping pedals for years, and it’s hard to break old habits I guess

I like me some scene mode too though. I like to toggle between them for different needs through the show, so being able to edit the names in gigview stomp mode would be very helpful to my old eyes and brain. I’m sure they plan to do this eventually but I’m voting anyways lol

Thanks again for an incredibly awesome update Doug, and Team!!!

Rename and color are obvious needs. I also think that parameters should be assignable as well. Helix does this with a min/max setting for a given parameter assigned to a stomp. This is very useful to turn up a volume or a gain when you hit a solo.

+1
Custom names in stomp mode.
Custom coloring in stomp and scene mode.
Being able to see the colors dimmed when the stomp is off/scenes are inactive.
Being able to change the text size in gig view, to make short names bigger and easier/faster to read on the gig.

I use the stomp mode to just send midi CCs without switching an effect.
The name then remains empty in the gig view.
It would be nice if you could edit the name of a switch even if it doesn’t have a stomp effect assigned to it to see immediately what midi action is bound to the switch.